Do you remember when you were at school and there was the bunch of talented kids, playing flute or piano and basking in their glory when they passed their "grade 3" or whichever the next level was?

I had no such talent for music, despite practicing the the recorder, when I managed to entice it from the corduroy drawstring bag and screech "Three Blind Mice" repeatedly, with my brother laughing that it was actually "Hot Cross Buns". Alternatively I could just about get through a rendition of Chopsticks on the piano.

My other option was ballet, but I managed to quit my classes, along with gym and tap dancing when I was small. I blame confidence. As my only memory is me balling my eyes out whenever my mum left to watch from the specific viewing space.

I literally longed for the day when I could say I had achieved a certificate in a grade something or other for a specific performance.

Now, don't get me wrong. I am no performer. I have never been very good standing in front of people to read a speech, or perform for a show. As a child, I was always the narrator in school plays, so I could look at my script, and avoid eye contact with anybody. So I could focus on the piece I read, I would hold the paper high up to block my face out from the audience. It came, as no surprise, that I resisted the urge to grade. I continually put it off making excuse such as I had a bruised leg, or that I was busy that day, etc etc.

Eventually, a few of us decided to give it a go. Grade 1. I looked at the list of moves and the criteria and realised I could have done this a while ago. It didn’t dampen my spirit, it actually gave me a boost of confidence I needed. When I had the support of 3 of my fellow polers, it suddenly all became a bit more manageable.

The next step was choreographing a routine. Sure, I can do the required moves; Kylie poses, underarm turns and step glides, but how do I form them to a sequence?

Oh, but wait, I need a minute, to a minute and half piece of music to perform too.

I literally got out my iPod, shoved it on to shuffle mode and started listening. I went from hip-hop to cheesy pop to indie to punk. I drew a complete blank. I was ready to throw in the towel at the first hurdle.

I kept my doubts and niggly issues to myself, had a nice hot bath and flicked on the TV to immerse myself in some trivial nonsense and forget it all, it would be much better to think about things fresh tomorrow.

The TV popped on with a few adverts. One which was showing the new Pretty Little Liars season. Not a programme I had watched up to this point, but I heard the music and got Shazam on the case.

The song was "Got a Secret" by The Pierces. I listened to it over and over, I got a feel for the beat and speed of the song. I watched the video on YouTube and learnt a simple hand movement move which they had used.

As I am not the most confident with linking moves together, I enlisted the help of my pole instructor, and we got together for a 1-2-1 lesson and she helped me choreograph the rest. We listened to the words and once she showed me how it was done, I even gave some input.

Performing on the day had its ups and downs. I was with my fellow students and many others from across the Pole Passion groups and I was attentively watching the other routines and performances and felt a wave of excitement flood over me. It was in that moment when the fear set in and I turned to my close friend, Marie and said "I've totally forgotten it". She gave me a half laugh and said "you'll be fine!" and I swallowed hard and thought to myself "nope, I know it's gone."

My name was called and I made my way to the front, panicking, dreading what I was going to do. The mixture of moves all jumbling up in my head and merging in to each other, and in the wrong order. I could see my friends; Amy, Donna and Marie. I could see my instructor. She smiled and mouthed "good luck" to me and I instantly felt like a failure before I had begun.

The music started and I began with my routine. Step, step, under-arm turn.... I froze. I looked out to the sea of people in the audience. I blanked. I apologised to Kay (the organiser) and ran off the pole mat. I ran to my friends and began crying. I had failed. I had failed myself, my friends and my instructor.

I could hear Kay on the microphone saying something but I was no longer listening. My friend Marie grabbed my hand ad led me to the very back of the room where there were 2 r-poles set up. We sat on the edge of the mat and she literally wiped away my tears. She hugged me and told me I could do it again. That's what Kay had said. I had another shot. I explained to Marie that I was too busy watching everyone else's routines that they became mixed up in to mine and I couldn't remember anything. Luckily for me, Marie knew my routine as well as her own. She talked me through it and I performed it at the back of the room. Now all I had to do was face the crowd again and take another shot. I was more scared than the first time.

I didn't ever participate in grading for the privilege of saying "I am grade 'x' in pole fitness". I always thought that was what I wanted. I did it for myself. I did it to face my fears head on and push my boundaries. I did it to learn new things, such as choreographing my own performance.

Oh, and I got back on the stage and performed my moves and I passed. I didn’t just pass, I passed with full marks. I went on to choreograph my second grading all on my own. I also passed that with full marks. Grade 3 next..... Wish me luck! 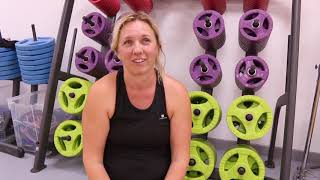